Since our recent post of the letter we received from a Norwegian politician about underground bases and that country's preparation for a future disaster, our mailbox has been full of messages from all over the world.

We have been completely unable to reply to them all, but we have carefully read everything we have received.

After a week's silence, we heard from our source again a few days ago. He is well, but is keeping his head down for understandable reasons. He has invited us to forward any relevant correspondence to him from others, and we will do that on a selective basis. He has also promised that he will draw the 'alien' symbols he saw, and fax them to us.

To those who have asked understandable questions about his veracity: we have done everything we can to confirm his identity and authenticity and are certain he is exactly who he says he is.

Many friends and correspondents in Norway and Sweden have been in touch, some offering intriguing details. To many of them, this information was not new and confirmed what they had known from other sources. We received specific confirmation from two scientists and one ex-intelligence source that these facilities exist (and that both Sweden and Switzerland have the facilities to take their entire population underground if need be). A number have asked to be put in touch with the politician who wrote to us.

One correspondent confirmed a great deal of detail. His message is so important that we have published it here in full (having edited out personal information which may have identified him to the authorities). His family has first hand experience of the facilities which our source reported.

I just read your article about the Norwegian politician and his letter and information to you regarding underground bases, 2012, etc.

I must say I found this quite fascinating. I already know of the Svalbard storage place, which when it was announced made the signals go off for me thinking it had to be some specific reason for this for something they know will happen soon.

Regarding the rest, I am also Norwegian, I am from a military family, and have been told by my mother who served a long time in the military and other governmental institutions about these underground bases.

I know the location of one of these bases and have seen it myself. It's within a big mountain in my old city where I used to live and grew up before I moved from Norway a couple years ago. The place is called Baneheia.

My mother refused to tell any details about it, except for that it is created for an emergency. Only specific personnel will be allowed, such as herself and other military people, and other important people, politicians, scientists and other civilian people they consider important.

She has also ben to another base in an area called Evje, and this underground facility is very huge, she said, much bigger than the Baneheia facility. She also said there is a base in the Stavanger area that she knows of.

She also supplied me with a photo of a base in Sørreisa, and said this is another underground base but she is unsure of the size of this base. I attach the photo here. This is the top of the mountain base, and she told me these 'spheres' are probably powerful radar systems that monitor a huge area.

She told me other interesting things, such as that that the big electronic corporations of the world in reality are run by the same people at the very top level, but they just create different names and brands and 'packaging' of the same products, or rather products that are developed and owned by people high up in society that run these electronic manufacturers with total control.

Regarding Baneheia, my mother said that the rest of our family would NOT be allowed to enter there in case of an emergency.

She also said she could not say any more about what was inside or how it looked, as she had sworn and promised to her officials to not tell anything more, and she is a woman of her word and keeps to her vows.

On another occasion, I briefly got to talk to another person from the military who had also been there. He gave me a little more details. He said the facility is huge and has many separate rooms with different purposes, but he was not allowed to enter these rooms and was confined to a specific room where he worked with computer related systems for the military. But he said that, from what he could see, this facility could house several thousand people, and it was extremely huge and highly technological.

It was also reported that of seven men who worked together at some project in this facility, four of them died of cancer. This was published in Fedrelandsvennen, a Norwegian newspaper from the city of Kristiansand in 2001. Unfortunately, the article is no longer online.

One of my friends, who worked for NSA for several years, has also provided me with some great and astonishing information regarding underground bases and other activities of the governments.

He confirmed that there are plenty of these bases around and that in some of them they are doing some very strange experiments and research, related to things such as time travel, journeys to other dimensions, alien technology etc, and he himself was in the process of recreating a spaceship and working on computer simulations for this purpose, and he showed me complex computer generated material related to this as well as illustrations of this spaceship.

He said that at the moment the governments are in contact with Mars, and even have such 'Stargates' connected with Mars so that they can travel there in a few seconds instead of using spaceships. He also claimed they are currently working on terraforming Mars - this means making Mars a suitable and possible place for humans to live. At the moment, Mars is more or less dead on the Surface, though there seems to be some life underground.

He suddenly disappeared and for the last couple years I've been unable to locate him or get in touch with him.

I can mention however, that he was adopted, and according to himself raised up and being prepared to work for the governments since his early childhood due to his high intelligence and other 'abilities'. He was indeed an extremely bright individual, personally I would say a genius, and he was involved with extremely complex mathematical and scientific material that he showed and discussed with me on several occasions.

I will first of all present you with some maps and photos of the area where this main facility I've mentioned is located.

The photo on the top right of the composite image below is what is called Gimlemoen, which used to belong to the military and was restricted for unauthorized personnel. I was there several times due to my mother working for them.

Recently they officially closed down the military operations in Gimlemoen, and turned it into a university campus instead.

However, some of the old bunkers and underground systems still remain in that area. I have personally visited some of them and been deeply underground. At one point I ended up in a large room that had a huge iron door with a big metal wheel on it and several locks. I could not open this door so nor do I know what was behind it.

There is also an aerial photo of Baneheia, where the current underground base in the mountain is located. This is at the top left of the image below. I've made a purple circle at the location of the entrance. 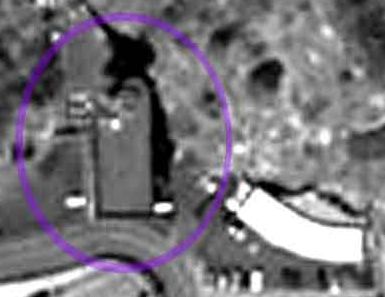 This rectangular structure is the entrance which leads into the mountain. The white structure to the right of it is some other buildings I assume is related as they got tons of antennas on top and satellite dishes etc and other strange devices.

As you see, it's a large mountain, with lakes on top, so how deep inside it goes into the mountain can only be speculated.

[Click on each of the four images to enlarge them:] 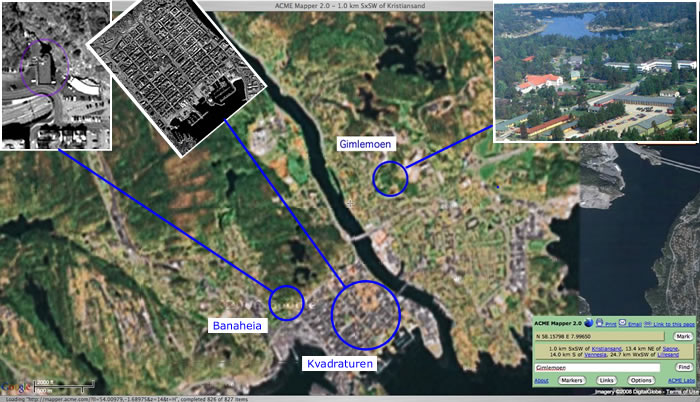 Also notice that Gimlemoen and the Baneheia mountain are very close, only separated by the river. If any underground connection ever was established between the facilities in Gimlemoen and the facility in the Baneheia mountain below the river I have no idea, but as I mentioned I did find a 'bunker' going deep down underground leading to that room with a huge iron door that it was impossible to open. This was in Gimlemoen, and the room was covered with half a meter of water on the floor.

I've discovered something that seems like air vents in the middle of the woods on top of this mountain, which I assume provides air into the base below. The vents are placed in rather inaccessible areas and far away from any paths. They look like this, except that they are more modern.

I have on several occasions seen heavily armed military personnel outside the entrance of the mentioned facility. And this is strange, as Norway is not a country where the military or police normally walk around with guns. In fact, they are not allowed to carry guns unless it is an emergency situation. It's actually the only time I've seen the military carry guns in public while I lived in Norway.

Things should be pretty safe over here, I mean Norway is not exactly like Iraq having any specific needs for such bases and military work unless there is really something they know that is coming that the rest of us do not know.